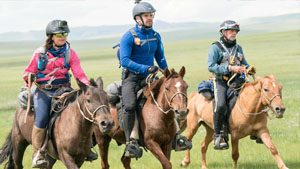 Returning to his roots as a horseman, commercial agent and director of Gunning Real Estate, William Gunning has successfully completed the 10th Mongol Derby.

William was one of 44 riders from 12 countries who took on the challenge of the world’s longest and toughest horse race as classified by the Guinness Book of Records.

“I was inspired by the legacy of my grandfather who was a great horseman and my childhood which saw some of my fondest memories in the saddle at their farm in Gloucester,” Mr Gunning said.

“In preparation for the event I spent time around Gloucester, riding with friends who are farmers.

“I don’t actually own my own horse and they were supportive of my dream. I saw them struggling with the mental pain of drought, debt, as well as families who had lost loved ones to suicide. As a result I chose the Black Dog Institute which raises funds to support mental health issues and suicide prevention as my charity for the event. I am delighted to have raised $10,000.”

“I finished 20th in the race which took eight days to complete. I had 30 different horses, with a new horse selected at face value from a choice of 44 available every 40km.

“It was tough on the body. There was no time to bond with the horses and many were semi wild. I selected a mix of horses – race horses who galloped the whole 40km, and some rocking horses who really didn’t want to move, as well as bad tempered ones – I was bucked off 8 times!”

Mr Gunning was overwhelmed by the kindness and spirit of the Mongolian people and learnt a lot about himself during the journey.

“They were very welcoming in offering their homes and their level of generously was something I had never seen.

“I like to plan my day, week and month and thought that with all that time in the saddle I could solve the worlds problems, but I was wrong. I couldn’t think 15 minutes longer than what was ahead of me, I had to deal with the situation at hand which is something I don’t like to do.

“There was an exceptional level of camaraderie by the participants. My horse chose who I was to ride with and my first impressions of people were often wrong. The other participants became my heros.”

Looking ahead, William plans to enjoy spending time with his wife and young family but there may be more adventure in store in the future.

“I am not going got climb Mount Everest but the organisers of the Mongol Derby are planning to hold a race in Patagonia and I’d love to do that,” Mr Gunning said.

For further information or to arrange an interview with William Gunning contact Helen Hull at media@gunningre.com.au or 0419 642 961. Images available on request.